The Myths and Mysteries of Marriage

The Center for Common Sense Counseling 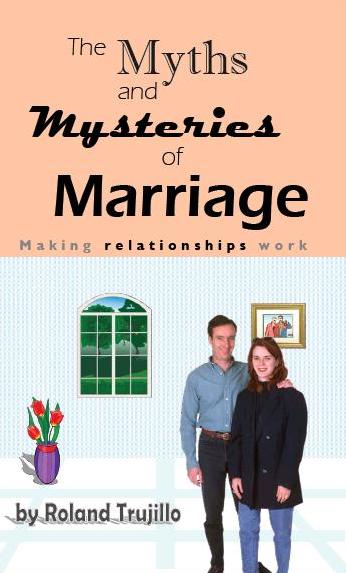 The Myths and Mysteries of Marriage

Formerly published as
My Husband and I Argue All the Time

This book is dedicated to all the men and women everywhere who stay together, for richer or for poorer, for better or worse, until death do them part.

Mandatory disclaimer. I am not a doctor. I am a pastor. The information provided here is for educational and informational purposes. In no way should it be considered as offering medical advice. Doing anything suggested or recommended in this book must be done at your own risk.  Please check with a physician if you suspect you are ill.  The information contained is not intended for medical advice. You should always discuss any medical treatment with your Health Care Provider. If you are in an abusive relationship, seek help immediately from your physician, mental health provider or spiritual care giver. If you are in danger, contact 911 or your local emergency hotline immediately. If you need someone to talk to, you can also contact www.befrienders.org. You are not alone. People are standing by to help you.

The Dating and Mating Game Is Not a Game

“A Rose by Any Other Name is Still a Rose”

Why I Decided to Become a Pastor

Where to Find Real Solutions to your Relationship Woes

More About Avoiding the Blame Game and Solving Your Problems

What the Clergy Gets Right and What They Don’t

Sex in Marriage – The Shocking Truth

How to Forgive and Forget

How to Apologize and Clear the Air with Dignity

Who Should I Marry? Courtship and Pre- Marriage Considerations

A Deeper Look Into Relationship Dynamics

Just How Important is Dad?

Men, Straighten Up and Fly Right

Are There No More Good Men Left

Can I Reconcile with My Husband, Wife, or Child?

How Do I Become More Forgiving?

Is Food Your Secret Lover and Enabler?

My People Perish For Lack of Knowledge

Good Dads and Fathers – We Need Them More than Ever

Recovery: Finding the Way Back from Naughty to Natural to Innocence

Coping with Manipulative and Controlling People

My Husband is Annoying

My Wife Asked Me to Move Out –What Should I Do?

Change and Trauma: the Legacy of the Human Race

A Mother’s Lament - My Son Doesn’t Listen to Me

What is the Number One Cause of Divorce?

My Wife Cheated on Me – Now What?

Finding the Best Marriage Advice – Trust Your God Given Instincts

The Strong Family—Ten Lessons in Faithfulness

The Dating and Mating Game Is Not a Game

Relationships make the world go around. We love people and we hate them. We want to be around them and then we want to get away from them. We can’t live with them, and we can't live without them.
And nowhere is this more evident than when it comes to dating, courtship, long term and short term relationships, partners and spouses.
First I want to say that all relationships start off with excitement and dreams of living happily ever after, and yet a large percentage end up as a living hell. Many of us saw our parents arguing and fighting and we hated it.
We were sure that our relationship would be different. But once we got involved with someone for awhile--sure enough, soon we were arguing—and we are lucky if it was merely arguing.  Sad to say the daily newspapers are full of stories about arguments that turn into violence or even murder.
Something is wrong. If love turns into hatred, then it wasn’t real love to start with. It proves that what most people think of as love is not really love at all.
Some relationships settle into long ones. Many appear happy and fulfilling on the surface. But the truth is that many are not. Something is still wrong. Each partner suffers--he in his way, and she in her way.
I remember when I was a boy, my mother had some good lady friends. I was surprised and shocked by what was said about their husbands. Each wife not only openly complained about and criticized her husband, but also stated that she was secretly unhappy and unfulfilled.
I was shocked because in private they seemed to have contempt for their husbands, and what was said in private was quite different than what was said when the husbands were present.
I also got to listen in to what the husbands said when, for example, the men would go fishing while the women did something else.
When I was with men, I heard a different story. The men were unaware of their wife’s secret unhappiness or of their wife’s secret contempt.  The husbands thought that everything was basically okay with the marriage.
The men did admit that their wives never seemed to be satisfied. The wives always wanted something. They wanted him to lose weight, to stop smoking, get a better job (like some other friend’s husband had), or go to church more. The wife wanted him to improve or change in some way.
The wives, according to the husbands, were apparently never satisfied. They wanted a bigger house, more furniture, a vacation, or something. But when she got it, she was still not satisfied with it. Nor was she satisfied with any self improvement he made. She always found something to disapprove of. Yet the husbands were not aware of their wife’s secret unhappiness or that the wife was complaining about him behind his back. The husband typically said that his wife was confusing, and he was at a loss as to what she wanted.
But like I said, for the most part, the men thought that the relationship was basically okay. Without trying to be rude, I must say (to use an old expression) the men were “fat, dumb and happy.” They did not suspect the deep unhappiness their wives were feeling.
Occasionally one of the husbands or wives would privately remark that they were staying together “for the sake of the kids.”
It seemed as though the wives were far unhappier with the husbands than vice versa. Somehow they wanted something from their husbands that they were not getting. The wives seemed to think that what was needed was better communication, intimacy and sharing that would make things right.
But their unhappiness and continued complaints no matter what their husband did proves that it was something deeper that they needed.
They could not put into words what they needed. But I can. And I will spell it out in this book.
Their husbands could not figure out what their partners wanted. They tried everything--from flowers to champagne and hot tubs for two—but nothing seemed to satisfy the wives.
I will tell you husbands later what they want, so keep reading.

Why I Decided to Become a Pastor

Where to Find Real Solutions to your Relationship Woes

I also wish to say that it is too easy to blame the church or the schools. When things go wrong at home, such as when the kids start going astray, parents often take two approaches: First they look to someone else to solve their problems, such as the schools, the government or organized religion. Then when things go even more wrong, they blame the ones who they went to, and then again, demand that the outside institution do even more. Blaming is a distraction from seeing the part that they played in what went wrong. Looking to someone else to solve your problems breeds dependency and stifles real growth.
I will elaborate on the above themes.
Parents, for example, often blame the church, the schools, the popular culture, or the government. They fix blame on an institution, as if it were the school’s fault that the kids have gone astray. But I have to say that the number one influence on the kids is still the parents. If others begin to have too much influence on the kids, it is because of the default of parents who have abdicated their authority and handed over the kids to someone else.
And when it comes to marriage, the Moses of the family and the person to whom the wife should look up to with respect is the husband. If he is weak, violent, uninformed, or if he makes her his god, then how can she respect him?
If he does not have wisdom, how can the family look to him to guide them when things get a little rough?
And if he does not have the faith and conviction to do what is right and wise, because he is too deferential to what others say, how can he keep the family from being misled?
Another variation of the “blame the schools and the government card” is blaming the economy. “If the economy were better and if we only had more money, we wouldn’t have to argue. We could live in a better neighborhood, have more things, pay our bills, and have a better house. Then the marriage would be better. If the schools had more money for computers, then the kids would excel.”
I hope you realize that none of the above is true. People can be happy with very little. As the old saying goes, “The best things in life are not things.”  Abraham Lincoln educated himself using the fireplace for light, and with only one book!
I also want to put in a word of defense for the churches. I have already said that wolves in sheep’s clothing have gotten into the church and are very wicked, leading many people astray and turning others off to the very thing that could help them.
But having said that, I must also say in defense of the churches and the ministers—many church people are decent and do good work. Please don’t tell me about the inquisition. I know that a great deal of harm has been done in the guise of religion.  I already said that twice in this book. But I also know that when there’s an earthquake in Haiti or a typhoon in Indonesia, the ones who always arrive with medical help, supplies and food are the Christian churches.
I also know in my heart that many of the Christian people who are my neighbors, friends, and associates are good people.

If they have any fault it is that they are a bit gullible and authority oriented. They are too trusting of the powers that be, and they believe more in various authorities’ nice clever words than in what they know in their heart. Being too trusting is probably why over 90% of Christian parents march their kids off to the public schools, which now have American students ranking below third world countries in academic achievement.
Being too authority oriented, they look to the government to do something, to the church leaders to teach them and tell them what is right, and to science and medicine to save them from their unhealthy lifestyles.
When we put others on a pedestal, believe and trust in everything they say, and look to them to do for us—this puts a huge and unfair burden on the authorities.
They try harder and harder to help, cure, and save us from our own folly. But they are only human.
And before long, our weakness tempts them to have contempt for us or to take advantage of our naiveté.

© 2019 The Center for Common Sense Counseling.